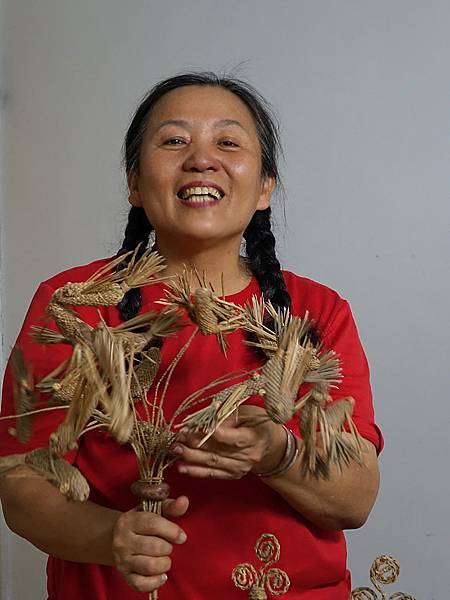 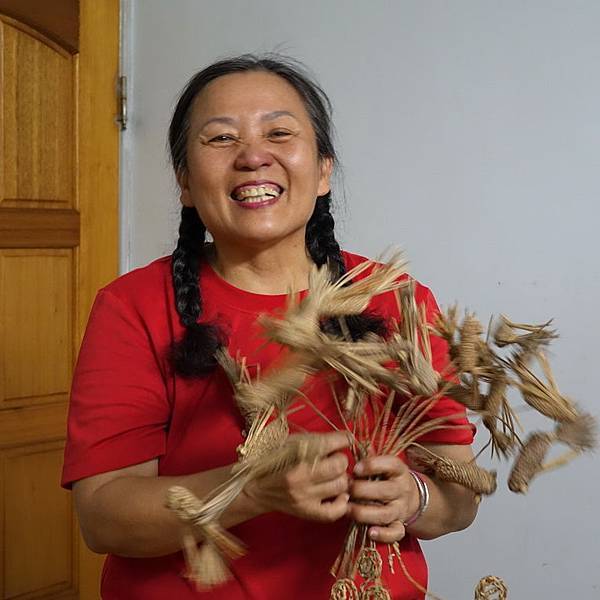 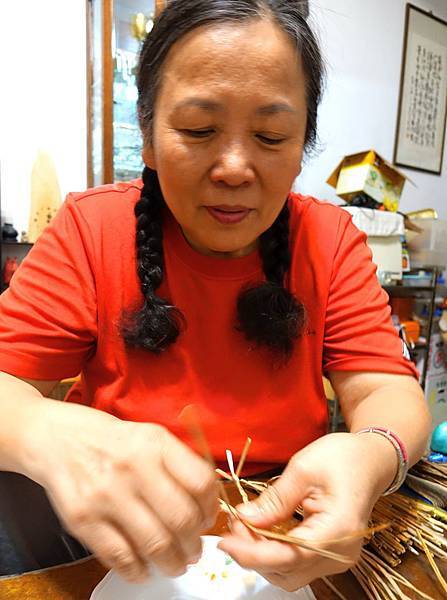 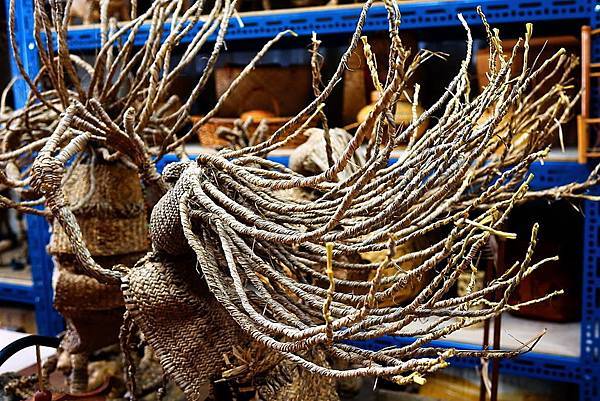 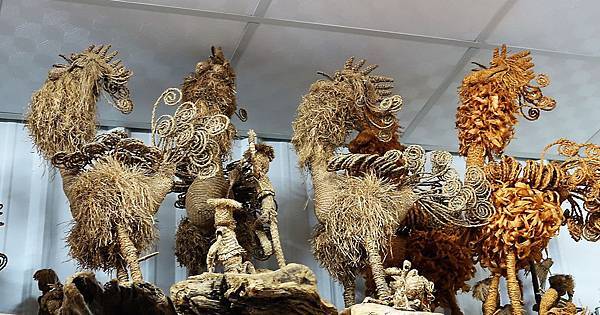 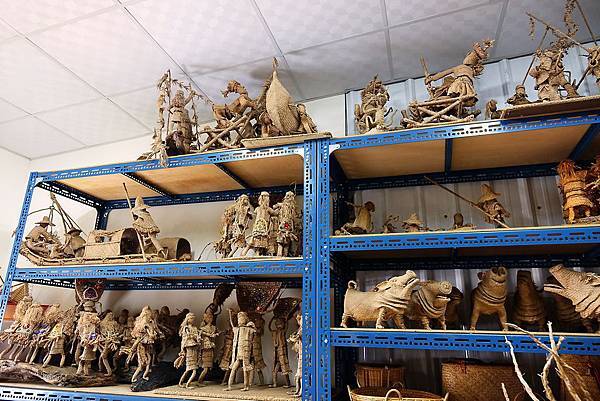 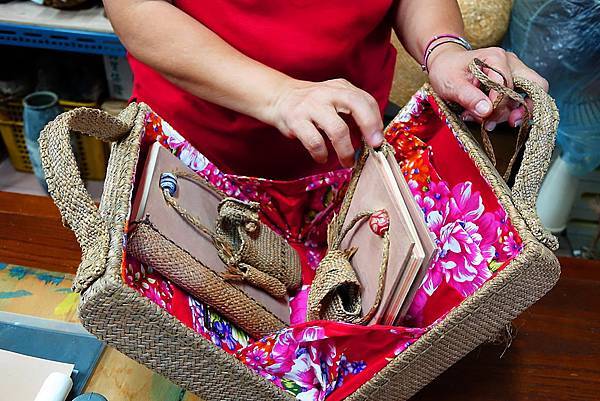 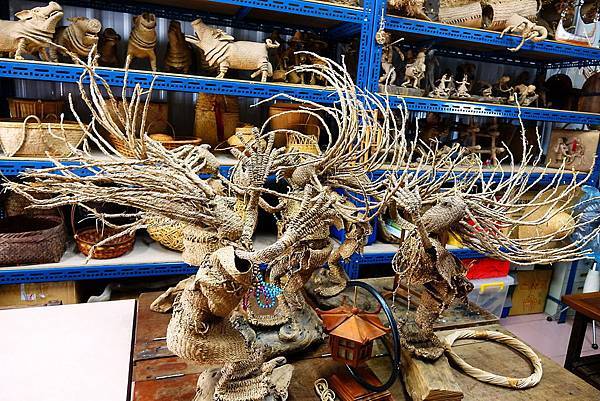 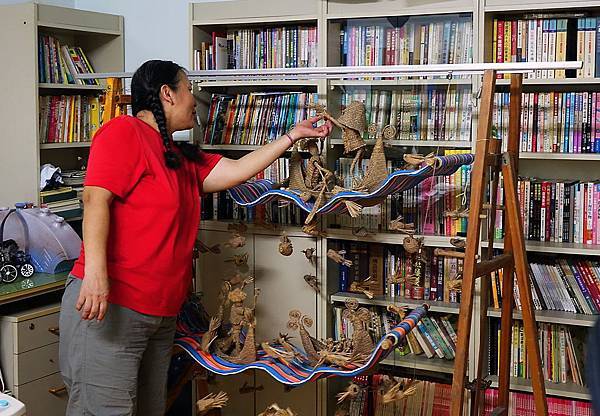 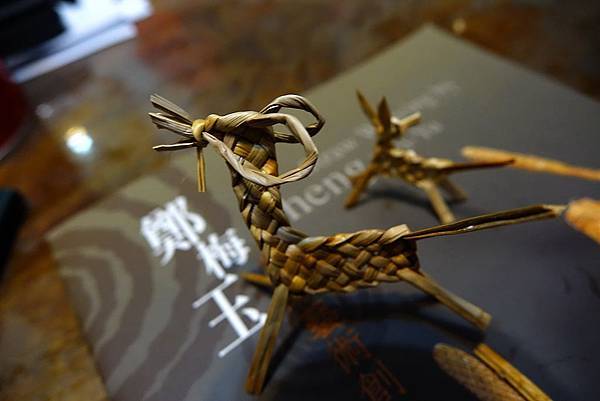 Rush is a perennial plant that grows in wet soil, and ranges from four to five feet in height. Rushes in Taiwan, which can be applied to weaving, have several species such as Dajia rush, triangle-rush, bog rush and pack rush. Of these species Dajia rush is the most popular because of its best quality. The documentation about the traditional rush weaving handicraft may trace back to 300 years ago. In the beginning rush weaving, mainly for the purpose of making daily articles, was regarded as the family side jobs for housewives going on at their courtyard. It reached its peak between 1901 and 1903, but it was doomed to decline with the rise of industry.

It was just two days prior to the Dragon Boat Festival when we visited Ms. Cheng Mei-yu(鄭梅玉) at her home. It was also a perfect weather for Ms. Cheng to dry up her rush weaving handicrafts. Right at the front yard of her house were string after string of rice cakes which are not edible but only part of her handcraft works. Ms. Cheng was taking advantage of such a wonderful weather to dehydrate her rush handicrafts to keep them from going moldy and to make it easier to preserve as long as possible.

Although retired from teaching at Hsinsheng Junior High School台東縣立新生國民中學), Ms. Cheng, youthful and naive with pigtails dangling, depicts how she took to the road to this wonderland of rush weaving:

As a child, she would often cling to her mother and older sister, who were skilled in wool knitting handicraft. She really intended to specialize in home-economics at college only to fail to pass the JCEE by narrowly one point. Eventually she was enrolled in the department of biology at Changhua Normal University(彰化師範大學).

After her graduation, Cheng began her teaching career at Hsinsheng Junior High School, Taitung County. At her leisure time she never stopped her hands from weaving small articles with paper string. Gradually her paper string articles were widely loved by her friends, colleagues and students.

In 1996, Cheng volunteered for the workshop the Cultural Center, Taitung, serving as an assistant to Ms. Huang Chao(黃嬌), one of the national assets, who conducted the course of “Rush Weaving.” As a result, the volunteer turned out to be a real student, practically obtained the most fundamental knowledge and skills of rush weaving during the three-month course: weaving hats, handbags, bags of various sizes and so on.

Not long after the course, due to being unfamiliar with the characteristics of rushes, she often wove articles out of shape. As a matter of fact, the master would unsparingly criticize her handicraft articles unsatisfactorily made. Nevertheless, Cheng was far from frustrated. Instead, she challenged by putting in extra hours practicing in the hope of improving her skills by far better.

Thanks to Mei-yu’s previous knowledge of paper string weaving, it turned out to be exceedingly easier for her to shift into this new field of rush weaving. After the course at the Cultural Center, Cheng attempted to pursue further lessons from Master Huang Chao,who was pleased to share with her even more advanced skills such as making round articles, adding-and deleting- stitches, connecting and putting on an end, etc. Ever since rush weaving has been incorporated in Cheng’s daily life.

Cheng Mei-yu is not a type of person who would feel satisfied with what she has already gotten, that is, being able to weave plain daily articles in a traditional way. She began to challenge the weaving skills of making figures of three dimensions--cubic--rather than of one dimension--flat. But there was no reference book of this kind to refer to. All she had to do was find her way out, entirely depending on herself by trial and error. Not until almost one full year passed did she successfully shape five rush dolls. They were placed on a round plate for her children to spin and play with. As her daughter eagerly asked her to have the little dolls dressed, she wove tiny bamboo hats, hoes, simple clothes for each of them so as to look as much like farmers as in her image of a little girl. They were put together as if in a reality. This work was named “Hardship,”--(meaning hands and feet in dreadful shapes from working excessively hard)--which won the First Traditional Weaving Handicraft Award.

Winning an award for the first time brought Cheng Mei-yu great encouragement. She could hardly believe that her short fingers were available to play such magic to turn ordinary rushes into art pieces placed on display.

Cheng Mei-yu thinks she is kind of really lucky. Her husband and children encouraged her with entirely spiritual support so that she did not have too much worry. That left her plenty of time thinking about how to make rush weaving from flat to cubic, from ordinary things to art pieces. The once fashionable weaving skills were reborn.

She came to realize the key in essence. The elegance and sophisticated shapes in her works are greatly distinguishable from the others which use seaming techniques and treat round shapes rather roughly. Cheng’s determination to achieve perfect workmanship and her persistence finally paid off.

Cheng has volunteered to serve in the Taitung Cultural Center. She got to know many aboriginal amateur artists, and enthusiastically helped them sign up for various contests. After winning awards, they cordially invited Cheng to take part in the awarding ceremonies in the tribe. The aboriginal culture has slowly penetrated into her heart and imperceptibly influenced her works.

Afterwards, she made a significant breakthrough on the original skills of weaving Lanyu canoes with sweater needle weaving skills and accomplished “Dawu, Flying Fish, Lanyu Canoe(達悟、飛魚、蘭嶼舟),” which won the award for the Weaving Traditional Handcraft Prize. After overcoming the difficulties, Cheng Mei-yu continued finishing the works of Lanyu Series: Inheritance, Sailing towards the Sea, Abandoning the Canoe, and Dance with the Ocean.

In 2003, she was invited by an art technician of the Saysiyats(賽夏族), Pan San-mei(潘三妹), to participate in Pastaai, a mysterious ritual for dwarf’s spirit, in Nan-chung(南庄), Miaoli County(苗栗). She was attracted by the mysterious atmosphere created by belly bells throughout the whole ceremony. Then she spent six months studying the data and expressing Saysiyat style on the flags and belly bells in her unique style. This achievement was considered a new expression of Pastaai.

In 2008, returning from Maljeveq(a ritual held every five years) of the Paiwan tribe, she finished “Monkey Stabbing” and “Ball Pricking for Blessing.” During the process, she kept observing

the monkey’s face as well as the stabber’s, and she was struggling to work out: how to represent the facial expression and the inner feelings of both animals and human beings as well with the application of rush weaving skills to make her works appear emotion in abundance.

In 2009, Cheng strongly felt inadequacies in the knowledge of aboriginal culture, so she was enrolled in Master’s Course in Art Industry at the graduate school, Taitung University. She was awarded a master’s degree with her thesis on “A STUDY OF WEAVING AND APPLICATION OF RUSHES.”

“A turning point is usually found where there seems no way.”

Rush weaving skill is losing its position under modern technology. But it still lasts and continues under the care of those who concern about it. The rush weaving was started and developed to the level of art by Mrs. Hwang Chao and extended by Cheng Mei-yu. Since retiring from school, Cheng has continued her work and recorded the processes, skills and textbooks of other rush artists. She hopes this long term legacy of Taiwanese ancestors will remain in our lives today, and will also, hopefully, be handed down from generation and generation. 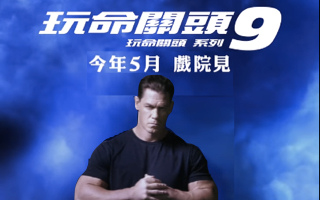 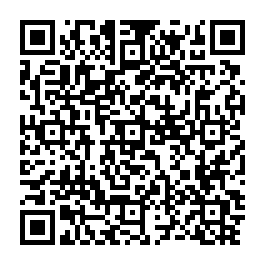